Stories are all about the characters’ relationships. Whether they face big, or small events, their relationships drive the action, conflict, and eventually the crises in their lives. While some characters aid the protagonist toward his goals, the antagonist and his allies are dangerous opposition.

In constructing the plot to a compelling story, the author must explore each character and his relationship to the protagonist.  But rather than a simple direct one-to-one model for these relationships, we explore the complexities of triangular relationships.

The most well known is the “love triangle” (see Figure 1) where the protagonist competes for the affections of his lover against a rival. Typically, this consists of two men contending for the affections of one girl, as in the case in Casablanca where Rick (Humphrey Bogart) tries to win back Ilsa (Ingrid Berman) from her husband, Victor Laszlo (Paul Henreid). 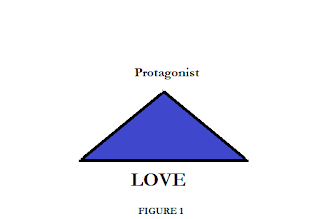 However, there are notable variations to this theme, such as Star Wars where Luke and Hans Solo appear to be rivals for Princess Leia, but in the sequel, we find out Luke is her brother. Likewise, in Harry Potter, we find Harry and Ron teaming with Hermione until we learn Harry has other interests.

A classic example is Romeo and Juliet. Here, Romeo seeks Juliet’s affection despite Juliet’s mother’s controlling love, who believes Juliet to be too young and Romeo unsuitable. 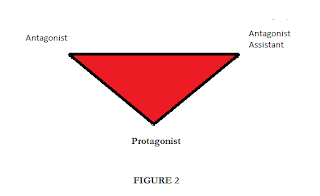 In addition, every story must have mediating relationships (see Figure 3) that precipitate critical events and crises. These mediators are placed in appropriate positions to set off the fireworks that bring about the conflicts and eventual climax. Each mediator has a sub-triangle connecting them to the protagonist and one other essential relationship. 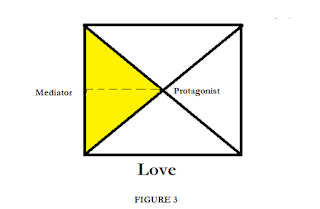 Finally, putting all this together (see Figure 4) we find a square composed of eight individual triangles that fit together into a square building block of interrelated characters all of which must work together to create a story. In the Casablanca Model for example (see Figure 5), consider the two small triangles of Rick-Sam-Ilsa and Rick-Sam-Victor that bring together the larger Love triangle of Rick-Ilsa-Victor. Recall that Sam has a pivotal role on the piano playing “As Time Goes By.” And realize the complicated mix of emotions in the small triangle of Rick dealing between Victor and the Freedom Fighters. Rick has sentiments for both, yet he is pulled in a conflicting direction by the basic Love triangle. It’s the author’s job to give weight to each emotion these triangles provoke. 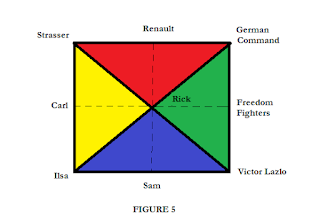 It’s tricky exploring these triangles. We find that each character faces conflicting complex choices. Each triangle reveals more layers of involvement. Not every character’s nature remains fixed throughout. Consider French Police Chief Renault who in the end joins Rick and switches sides from Vichy to Freedom Fighter.